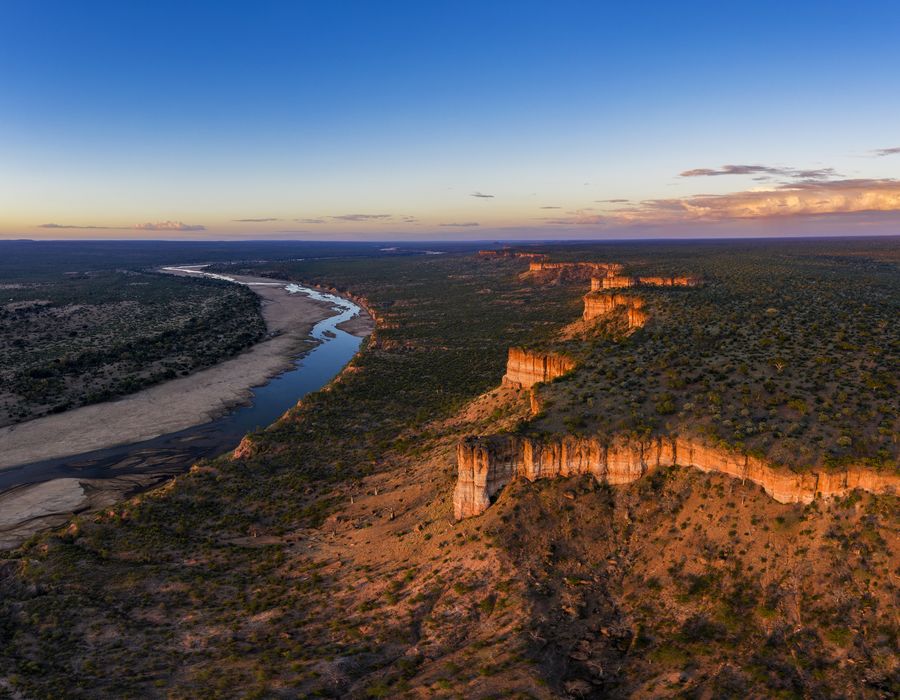 The word Gonarezhou means ‘Place of Many Elephants’ in Shona and the 11000-strong population steal the show here as they are some of the largest-tusked elephants in the region. This vast, untamed wilderness is also known for the iconic red sandstone Chilojo Cliffs that overlook the Runde River Valley. The cliffs have been chiselled over thousands of years of erosion into the 180m tall landmarks that they are today.

Gonarezhou is Zimbabwe’s second largest national park after Hwange and is located in the country’s south-eastern region along the Mozambique border. It forms part of the Great Limpopo Transfrontier Park, a peace park that links Gonarezhou with the Kruger National Park in South Africa and the Limpopo National Park in Mozambique. Animals are able to move freely between the three wild sanctuaries, which together form one of the largest conservation areas in the world. It is managed by The Gonarezhou Trust, a conservation partnership between the Zimbabwe Parks and Wildlife Management Authority, and the Frankfurt Zoological Society.

The Save, Runde and Mwenezi are three major rivers that cut their courses through the park, forming pans that draw hundreds of species of birds and game to feed and drink. Four of the Big 5 are present here (rhino is absent), as too are cheetah, giraffe, zebra and various antelope species, including the nyala and smaller suni.

With over 400 species recorded, Gonarezhou is another of Zimbabwe’s top birding destinations, and it is particularly at the rivers and the pools where an incredible variety can be spotted. The usually secretive Narina trogon and Angola pitta can be seen and heard during courtship over the summer months, while birds of prey like the African fish eagle, martial eagle and lappet-faced vulture are regularly seen throughout the year.

Unique species of aquatic wildlife such as the Zambezi shark, freshwater goby, black bream and turquoise killifish are found within Gonarezhou’s various rivers and pools.